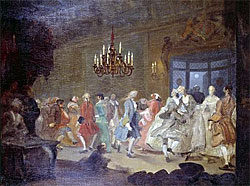 This dance tune was popular throughout Great Britain, Ireland and America. Although it was being danced years earlier, it was first printed in 1718 in Walsh’s Country Dancing Master, and also goes by the title, “The Geud Man of Ballangigh.” The following appeared around 1711 or 1712 in The Spectator, a satirical newspaper. It concerns tongue-in-cheek shock expressed by a fictional country gentleman observing his teenaged daughter dancing in public.

“Among the rest (of the dances), I observed one, which I think, they call Hunt the Squirrel, in which while the Woman flies the Man pursues her; but as soon as she turns, he runs away, and she is obliged to follow. The Moral of this Dance does, I think, very aptly recommend Modesty and Discretion to the Female Sex. But as the best Institutions are Liable to Corruptions, so, Sir, I must acquaint you, that very great Abuses are crept into this Entertainment. I was amazed to see my Girl handed by, and handing young fellows with so much Familiarity; and I could not have thought it had been in the Child.”.