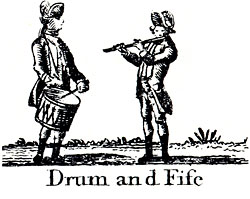 A fifer and drummer, from Catchpenny Prints, Bowles and Carver, London, first published in the late 1780s. Both the Massachusetts Regulators and the government militia called out to oppose them, marched to fife and drum music of the Revolution.

Despite many traditions and theories, the origins of this best-known of all songs of the American Revolution are not really known. Americans believed that Yankee Doodle dated to the 1750s and the French and Indian War, when British officers and men ridiculed the provincial and unprofessional behavior of the colonial militia. Whatever its origin, Yankee Doodle was familiar to both British and American armies during the Revolution.