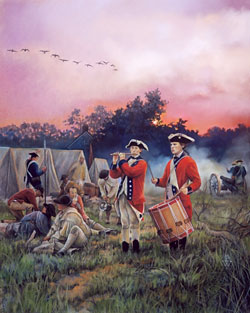 Field musicians needed to stand out amidst the smoke and chaos of the battlefield. The coats of the musicians awakening the troops in this modern painting are the bright red facing color of their regiment. During Shays’ Rebellion, Massachusetts veterans of the Revolution would once again rally and march to the music of fifes and drums. The painting, Reveille, courtesy Pamela White.

Many titles of fife tunes referred to particular regiments or commanders. "York Fusiliers," named after a British light infantry regiment, was among the more elaborate and showy of field music. Like their British counterparts, American field musicians often played music originally associated with other units and armies. In fact, the full honors of war included permitting defeated forces to play a march associated with the victorious army. The British denied this customary privilege to the Americans who surrendered at Charlestown, South Carolina, in 1780. In consequence, General Washington required that British army endure the same humiliation when it surrendered to the Continental Army at Yorktown, Virginia, in 1781.