Address to the Ladies 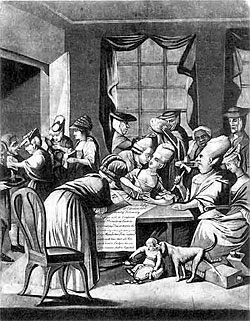 In this cartoon from 1775, these ladies of Edenton, NC, sign a declaration supporting the non-importation of British goods, specifically tea. A woman in the background on the left can be seen dumping her tea. These women are showing their patriotic zeal by vowing not to use goods imported from Britain; however, the artist must have opposed their actions, choosing to mock them by making them appear ugly and silly. During the severe recession which followed the American Revolution, American women were once again urged to stop buying imported goods. Courtesy of the Library of Congress.

"Address to the Ladies" is an adaptation of a song printed 20 years earlier. When it originally appeared in the Boston Newsletter, the song was part of an inter-colonial boycott of the British parliament for taxing the colonists without their consent for certain imported goods. The song encouraged women to join the boycott and use substitutes produced in America, or go without. During the economic downturn after the American Revolution, observers similarly urged American women, in particular, to curtail their spending on imported goods such as textiles, ceramics, and other "gew gaws" for the sake of their country. In 1787, a western Massachusetts newspaper printed this revised version of the original "Address."

Young ladies in town, and those that live 'round
Let a friend at this season advise you,
Since money's so scarce and times growing worse
Strange things may soon hap and surprise you.

First then, throw aside your high-top knots of pride,
Wear none but your own country linen;
Of economy boast, let your pride be the most,
To shew cloathes of your own make and spinning.

What if homespun they say, is not quite so gay
As brocade, yet be not in a passion,
For when once it is known, this is much worn in town,
One and all will cry out 'tis the fashion!

No more ribbands wear, nor in rich dress appear,
Love your country much better than fine things:
Begin without passion, it will soon be the fashion
To grace your smooth locks with a twine string.

These do without fear, and to all you'll appear,
Fair, charming, true, lovely and clever;
Tho’ the times remain darkish, young men may be sparkish,
And love you much stronger than ever.